de Blasio Corruption Started During His Political Campaigns, Not with Campaign for 1NY @ City Hall After He Became Mayor 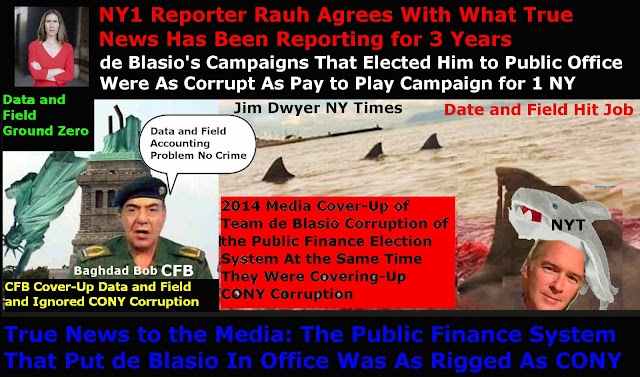 I
Count I Data and Field

How NYT's Dwyer Cover-Up Data and Fields
For One Staten Island Campaign, a Special Prosecutor Instead of an Auditor(NYT) 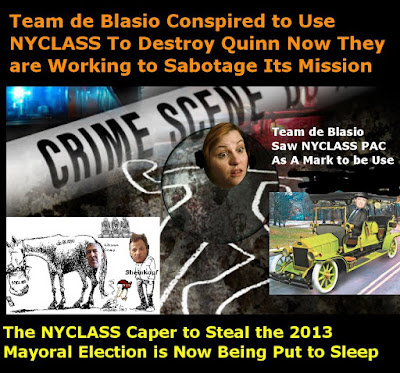 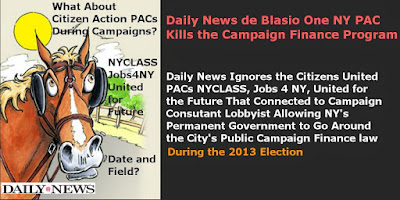 During the 2013 campaign NYCLASS hired campaign consultant lobbyists Scott Levinson who runs the Advance Group. Before the NYCLASS campaign Levinson worked with  Bertha Lewis, co-founder of the New York chapter of the Working Families Party, and the former head of ACORN in a tangled web of political cover-ups disguises as activism.  It was during de Blasio run for public advocate that the WFP created Data and Field to help the candidates they endorsed.  During the 2009 campaign the CFB declared Data and Field connected to the WFP in violation of the city's campaign finance laws.  In 2010 the U.S. Supreme Court held that the First Amendment prohibited the government from restricting independent political expenditures by a nonprofit corporation.  In 2013 Levinson was named the consultant for NYCLASS which is credited with taking out Quinn. The NYCLASS PAC was financed by true believer and team de Blasio. * As the Media Write About Not Enough Council Votes to Ban Horse Carriages TRUE NEWS Investigates How NYCLASS Was Hijacked To Fix the Outcome of the 2013 Mayoral Election

In 2014 the Daily News repored that the FBI was investigating donations to NYCLASS from men closeto Mayor de Blasio that may have been used toward anti-Christine Quinncampaigners  On May 21, lawyer Jay Eisenhofer gave $50,000 to NYCLASS, the animal rights group leading the crusade to ban carriage horses. Ten days later, on May 31, NYCLASS gave an equal amount — $50,000, to the anti-Quinn group. On June 1, NYCLASS received another large donation, this time for $175,000. It came from UNITE HERE! — a labor union headed by John Wilhelm. Two days after that, on June 3, NYCLASS sent the same amount, $175,000, to the anti-Quinn campaign. The issue? Both Wilhelm and Eisenhofer have long-standing ties to Bill de Blasio, one of Quinn’s Democratic rivals in the mayoral campaign. Wilhelm is de Blasio’s cousin — and a prolific fund-raiser for him. Wilhelm raised $6,950 for de Blasio’s 2009 race for public advocate and $80,000 for de Blasio’s successful campaign for mayor.

Media Cover-Up of NYCLASS,  Other Citizens United PACs,  Mayor One NY PAC
A Tale of Two CFBs: Albanese vs Campaign PAC NYCLASS,UFT's United for the Future
More about Lobbyists Mercury
The NYCLASS PAC Caper to Steal the 2013 Mayoral Electionis Now Being Put to Sleep
Why is the Media Cover-Up the NYCLASS Investigation? Other Citizens United PACs, Mayor One NY PAC
How the Advance Group Conspired to Steal the 2009 and 2013 Election
CrainsNY on the Advance Groups Double Dipping
The UFT Coup d'é·tat Of NYC Election System and Democracy
More On the Advance Group


Count III Campaign for One NY 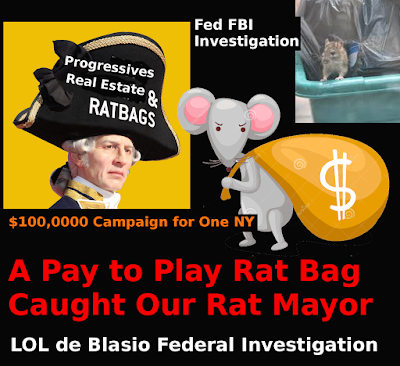 Now That the U.S. Attorney is Going After Team de Blasio the Press is Trying to End Its Cover-Up, Playing Catch Up With the Scandal But Missing Ground Zero of His Corruption the Campaigns Designed to Go Around the Public Finance Election Law
We Already Know About the Rat Bags,  $3 million of the $4.3 million CONY Coming From Companies Doing Business With the City, Money That Went to Senate Candidates Washed Through CONY
The house Bill de Blasio built: Given the way he'sorganized his fundraising operation (NYDN)

Posted by Suzannah B. Troy artist at 1:36 PM