I was going to tell you what Gerald Shargel should ask Bloomberg under oath but now I tell you in a 14 minute + YouTube why Judge Daniels must recuse himself if he is afraid of circuses because this is about Justice.
Just the Richard Valcich letter alone is enough to validate calling Bloomberg as well as his press conference after Mazer is arrested.

This is Haggerty Trial part 2.   In my opinion Judge Daniels and Preet Bharara are protecting Mike Bloomberg.
Mike Bloomberg, Team Bloomberg, Rose Gill Hearn, Rudy Giuliani and his deputy mayors turned lobbyists as well as top SAIC officials need to be called because in my opinion there was a whole lot of stealing going on before Mazer the Momzer and Denault were even hired and than look at 911 Tech corruption direct parallels to  CityTime no Mazer the Momzer and Denault, ditto all the other tech over runs...listen up.
Note: Like the Adrian Schoolcraft trial when ever that finally happens -- which will be the closest we get under Bloomberg to hold the NYPD and Internal Affairs accountable for corruption and abuses -- the CityTime trial for now (later the 911 tech trial) is the closest we get to holding Bloomberg, Team Bloomberg, Quinn and even Thompson accountable.
Posted by Suzannah B. Troy artist at 6:35 AM

http://suzannahbtroy.blogspot.com/2013/08/preet-bharara-citytime-crime-shady-time.html
Christine Quinn Term Limits Dr King  3.7M Stop Frisk
http://www.thisamericanlife.org/radio-archives/episode/414/right-to-remain-silent?act=2#play
PLEASE LISTEN TO THIS TAPE AND HEAR DEPUTY CHIEF MARINO FOR YOURSELF!!!!!!Listen to this and learn why the DA refused to put this in front of a grand jury -- because it was a sure indictment. (starts about 17:50 minutes in to the podcast.)

This interview AMAZING AND VERY DISTURBING!!!!!!!!!!!!!!!   Listen to the part about down grading rape -- they even have on tape the NYPD raiding his home with SWAT team and tasers."

Posted by Suzannah B. Troy artist at 3:20 PM

In my opinion Dr Fagelman's violent receptionist Delita Hooks also submitted a false medical report and the corrupt Detectives sealed up all her criminal actions with their own.

Posted by Suzannah B. Troy artist at 6:05 AM 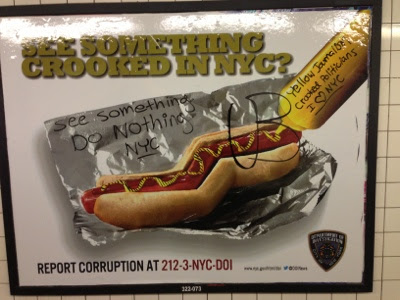 READ THE ABOVE LINKS CITYTIME CRIME UPDATE AND 911 CORRUPTION COVER-UP.

DESTINED FOR THE DUMPSTER.

SHE AND PREET REFUSE TO GO BACK

IN TIME CITYTIME TO PROTECT GUESS

I DID NOT TOUCH THIS POSTER BUT WHOM EVER DID "IMPROVE" IT -- DON'T YOU LOVE MIKE BLOOMBERG AND GOOGLE YOUTUBE BLOGGER'S IMPROVEMENTS LEAVING YOU WITH LESS RIGHTS...????

READ THE ABOVE LINK AND LEARN HOW INTERNAL AFFAIRS AND NYPD FIXED ME BEING VIOLENTLY ASSAULTED AT DR ANDREW FAGELMAN'S OFFICE.
POSTED BY SUZANNAH B. TROY ARTIST AT 9:03 AM

Posted by Suzannah B. Troy artist at 1:21 PM

http://www.youtube.com/watch?v=dh9TedhfthE&sns=em
Have 5,000 new Justice Cards exposing all involved and demanding Justice for People like me victims of crime as well as Police including Internal Affairs calling for a New Commission to Investigate NYPD and IAB Corruption.
I feel awful, the insomnia, the floaters and balls I see in my eye, and most likely a 2nd eye surgery thanks to Dr Andrew Fagelman's violent receptionist and neck damage.  The impact of NYPD and IAB corruption and fixing adds greatly to my suffering and health issues including Fibriod Tumors that have grown perhaps from the upset and lack of sleep.

In my opinion Dr Fagelman's violent receptionist Delita Hooks also submitted a false medical report and the corrupt Detectives sealed up all her criminal actions with their own.

http://www.scribd.com/doc/155408389/Suzannah-B-Troy-v-NYPD-IAB-City-of-New-York-New-York-City-Commissioner-Raymond-Kelly-New-York-Police-Department-NYPD-Internal-Affairs-BureauChi
Posted by Suzannah B. Troy artist at 2:25 AM

The only thing that could help these guys legacy is a Terrorist Attack.

Posted by Suzannah B. Troy artist at 9:30 AM

How many NYPD officers not caught for taking bribes and even worse criminal activities?

I also have medical reports and photos before and after including defensive wounds and I never put down my 2 bags on my left shoulder my left arm numb from 2 injections to remove a cyst or my iphone.In my opinion Dr Fagelman's violent receptionist Delita Hooks also submitted a false medical report and the corrupt Detectives sealed up all her criminal actions with their own.http://www.scribd.com/doc/155408389/Suzannah-B-Troy-v-NYPD-IAB-City-of-New-York-New-York-City-Commissioner-Raymond-Kelly-New-York-Police-Department-NYPD-Internal-Affairs-BureauChi

Sounds like the First Precinct is saying you are crazy but here is some food for though for you and your fans.  The NYPD First Precinct Detective Squad is corrupt and they fix crime and I caught them and Internal Affairs fixing crime regarding me being violently attacked  Dr Andrew Fagelman Office Soho 155 Spring St.

I contacted Internal Affairs and asked that the First Precinct Detective Squad be broken up since it is so corrupt.   I caught the 01 Det Squad fixing a violent crime and that is me with video evidence being savagely assaulted by Dr Andrew Fagelman's receptionist office manager Delita Hooks aka "Delite" and than sealing her false cross complaint along with her violent assault of me a medical patient.

Internal Affairs has now been caught in the corruption red handed allowing Det John Vergona and one of his supervisors to retire.

In my opinion Dr Fagelman's violent receptionist Delita Hooks also submitted a false medical report and the corrupt Detectives sealed up all her criminal actions with their own.http://www.scribd.com/doc/155408389/Suzannah-B-Troy-v-NYPD-IAB-City-of-New-York-New-York-City-Commissioner-Raymond-Kelly-New-York-Police-Department-NYPD-Internal-Affairs-BureauChiNow I wait for in my opinion corrupt Ray Kelly and his puppet head of Internal Affairs Charles Campisi to leave office and I am taking even more action regarding all involved in this case including the goal to get a new Commission in to NYPD and Internal Affairs corruption.

Posted by Suzannah B. Troy artist at 3:10 AM

I have a new batch of 1,000 but there is a typo -- it is should say Delita Hooks assaulted me but it says assault me.


Other wise it is good but my new double sided batch will be better --- I got a designer and a new place that will give me a great deal on double sided 5,000.


10 views away from 16,000 views as I continue my goal to expose all involve and if they are capable of feeling shame which they may not be my goal to shame them as well and it also makes it harder for them to get away with this...


St. Lukes Crimes Victim Unit had to delay my appointment to get some help dealing with being the victim of a savage attack at Dr Andrew Fagelman and his employee getting away with lies as well as violence and the NYPD and now Internal Affairs caught as well although IA denies it and says case still open the proof is IAB let Det Vergona retired and that IAB allowed it to go to Lt Agnes in the Integrity Bureau proof this was a going to be fixed yet again....


Can't wait to approve the changes on the new card and for now I am handing out the batch with the small grammatical error and this card exposes Det Vergona.

The new card I get Friday won't name him but this one does.

The new cards ad a new level calling for a Commission in to NYPD and Internal Affairs Bureau corruption as well.

http://www.scribd.com/doc/155408389/Suzannah-B-Troy-v-NYPD-IAB-City-of-New-York-New-York-City-Commissioner-Raymond-Kelly-New-York-Police-Department-NYPD-Internal-Affairs-BureauChi
Posted by Suzannah B. Troy artist at 10:51 PM

Navy Yard shooter was a Buddhist with a bad temper
http://nypost.com/2013/09/16/navy-yard-shooter-was-a-buddhist-with-a-bad-temper/
Delita Hooks, the Jodi Arias of medical reception with the NYPD and IAB helping her to get away with everything but murder.   Dr Andrew Fagelman's receptionist who sits behind a long closed off counter acted liked a creature from the Planet Rage and from the get go from behind the counter stood up slammed the counter and said I had not rights who are you?   Because I disagreed with her she retaliated against me and started to menace me coming out from behind the counter.
Youtube about 40 away from 16,000 views she made a hole in my retina and a far more serious 2nd eye surgery most likely and damaged cervical spine savage attack with my arm numb from cervical procedure cyst removal 2 injections and I held my bags and phone but used her momentum to get her to the ground but she would not let go of me.
NYPD rushed to seal her criminal activity with their own.    Violent people have a history.
POSTED BY SUZANNAH B. TROY ARTIST AT 4:33 AM

Posted by Suzannah B. Troy artist at 1:34 AM

Mayor Bloomberg 2013 Mayoral Election Board of Election Corruption Will all Votes Be Counted?

Are ALL New Yorkers that voted -- are they votes going to be counted?

If there are I am stating I believe Eliot Spitzer won.

Reminder NYC gov tax payer money abused 95 million dollar that went to Board of Election to contractors and "advisors" high priced consultants just like CityTime and even bigger 911 Tech corruption....

Mega corruption under Bloomberg Quinn and Bill Thompson was involved in CityTime and 911 but under Bloomberg it is the little People that get ticketed up to their eye balls and record number of false arrests.